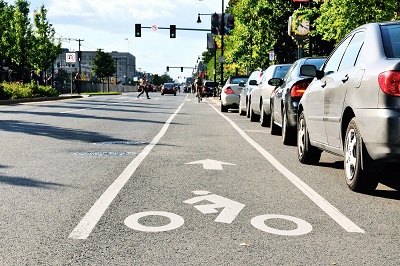 If you’ve driven in some of today’s most populated cities in the U.S, you have likely come across the new-ish road addition of the bike lane. Some cities began this trend many years ago, while others just adopted it a few years back. The number of bicyclists—hobbyists, competitors, and frequent commuters—is growing from coast to coast across the United States. Some data indicates that from 2001 to 2009 the number of trips made by bicycle in the U.S more than doubled. Let’s take a look at how the world of bicycling is growing and how that has affected the roads.

National Bike to Work Day (BTWD) is an annual celebration that happens across the country with commuters of all walks of life. When looked at the big picture and billions of commuters that crossroads and highways every day to go to work, the numbers might not seem particularly large but the trend seems to suggest that every year people become more and more interested to find alternate ways of getting to work. Many cities have also implemented a rent-a-bike program which facilitates people getting around certain city areas without having to ride the bus or use their vehicle. In fact, several states and local agencies are actively making moves to promote pedestrian and bicycle travel.

The Beginning of the Bike Lane

This movement began earlier than you think. In 1894, Brooklyn’s Ocean Parkway installed the first American bike path. This stretched 5.5 miles from Prospect Park to Coney Island. Just a few years later a national ‘sidepath’ movement advocates for protected bike lanes alongside all major streets. Funding, like for many things, is not agreed upon and not properly allocated, so very few are built. Not long after, the automobile industry gets underway, pushing bikes and bike traffic to the sidelines, as roads and eventually highways are built to accommodate the new vehicle.

It was not until 1967, that the first painted bike lanes merge in U.S streets as we know them today. This happened in California; they were modeled after the painted bike lanes of Northern Europe. The mid-60s were a time of renewed bike craze. This was largely a result of bike companies like Schwinn and Sting-Ray developing easy to maneuver and stylish bicycles.

It was then in 2006 that engineers in  Austin, Texas discovered that painting bike lanes on the streets would help prevent drivers from overcorrecting or getting too close to the bicyclist. This helped both the bike rider and the commuter stay safe and try to slow down the rate of bicycle accidents. Studied conducted shortly after showed that cyclists that rode in a designated lane did lower the risk of injury on the road. In 2011, the National Association of City Transportation officials published a report which guides cities on how to build protected bike lanes. Only about 2 years later, the total miles of protected bike lanes reach up to 142. This is a steady and significant jump from years prior.

Today, if you live in the El Paso area, for example, you have seen bike lanes painted throughout the downtown area and other areas of the city. In 2016, approximately 70% of cyclists that were killed on the road were killed in urban areas. Even today, with the movements of riding to work or walking to work, there is high traffic in densely populated urban areas. This means there is some risk when riding a bicycle in a busy city during traffic hours.

The development of the bike lane, however, did not completely eliminate the problem of bicycle accidents. As a personal injury law office, we have seen many bike accidents that happen on the road and can be traced back to inadequate driving or other factors.

According to some data, in 2017, 783 cyclists died in accidents with motor vehicles and almost 467,000 people were hurt in bicycle accidents in 2015. When a person is hit while on their bicycle, the injuries can be quite severe and dangerous. Accidents can happen at any time of the day and night. In 2016, for example, 51% of fatal bicycle accidents occurred when the sun was up. Another 45% happened during the nighttime. So it’s not just darkness and visibility that plays a factor in these accidents. These accidents happen due to a variety of factors.

Bicycle Accidents and How To Get Help

Despite the help that the bike lane has provided in reducing bike accidents, they still happen. The cost of bike accidents is high, as it usually involves injuries, loss of productivity, and even long-term effects. If you’ve been involved in a bike accident, talk to a personal injury lawyer at the Huerta Law Firm and see if you are entitled to some compensation to help you pay for your injuries.

« Texas Slip And Fall Law: Misconceptions and FAQs
The Importance of Renewing Your Vehicle Registration »